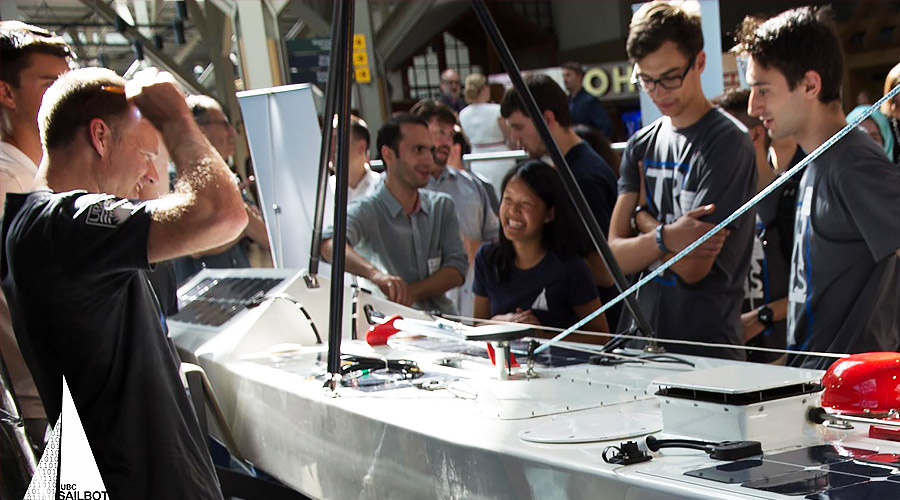 Every year, more than 60 students from the University of British Columbia in Vancouver, Canada come together to design and build a fully autonomous sailboat, a SailBot. But this year, the SailBot team is taking it a step further and building a fully autonomous Sailboat, named Ada, capable of crossing the Atlantic Ocean.

The project started in 2013 and according to their website, Ada “packs an advanced electronics package, accurate sensors, and satellite communication systems into a carbon fibre hull”. All this ensures that Ada can survive whatever an international voyage throws at her.

Before her voyage, the SailBot team must test the electrical, software and mechanical systems. After, over 20 team members will be working with the Sailbot full-time to help make sure she is ready for her international voyage. This includes 4-5 testing days/week before driving Ada and a 10-person team across the Canada to St. John’s, Newfoundland for final testing in the Atlantic Ocean before launching to Ireland.

Octopus Autopilots is incredibly impressed with the innovation involved in a project like this and jumped at the opportunity to help sponsor a project that is designed to push the boundaries of autonomous marine navigation and sailing logic.

For more information on the UBC SailBot and the upcoming voyage visit their blog.

This website uses cookies to improve your experience while you navigate through the website. Out of these cookies, the cookies that are categorized as necessary are stored on your browser as they are essential for the working of basic functionalities of the website. We also use third-party cookies that help us analyze and understand how you use this website. These cookies will be stored in your browser only with your consent. You also have the option to opt-out of these cookies. But opting out of some of these cookies may have an effect on your browsing experience.
Necessary Always Enabled
Necessary cookies are absolutely essential for the website to function properly. This category only includes cookies that ensures basic functionalities and security features of the website. These cookies do not store any personal information.
Non-necessary
Any cookies that may not be particularly necessary for the website to function and is used specifically to collect user personal data via analytics, ads, other embedded contents are termed as non-necessary cookies. It is mandatory to procure user consent prior to running these cookies on your website.
SAVE & ACCEPT
WordPress Lightbox

Have a question? Leave us a message.